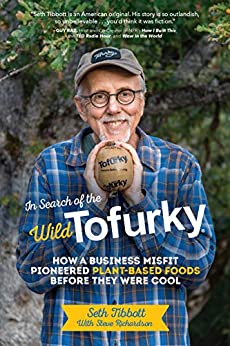 In Search of the Wild Tofurky: How a Business Misfit
Pioneered Plant-Based Foods Before They Were Cool by Seth Tibbott with Steve Richardson is truly a
must-read. This is a tale for all of the entrepreneurs, the environmentalists,
the foodies, the hippies at heart, the businessmen and women, and the people
who love a great underdog story.

Seth Tibbott chronicles his journey as he
turns his passion into a worldwide phenomenon – the Tofurky. He begins each
chapter of his story with unbelievable previews of anecdotes, such as studying
graffiti, renting space to piano-tuning clowns, and turning four trees into a
treehouse where he lived for seven years. He closes each chapter with heartfelt
and honest words of advice to inspire his fellow “bootstrappers” engaging in
their own journeys. Everything in between is a fascinating story about how a
dream became a reality.

Tibbott begins by warning readers that,
“The Tofurky story is the opposite of smart money.” It is by no means a story
about building a business to amass a fortune, but rather a story about how
preserving authenticity, positivity, and passion can reap great rewards when
you enjoy the work you are doing for your business.

Tibbott had the insight to recognize a
critical need amongst vegans. Thanksgiving meals tend to be meat-centric,
leaving vegetarians and vegans to only be able to choose from the side dishes.
The Tofurky deliciously addressed that need, and the brand has expanded to
provide some ingenious plant-based alternatives to meat products. This is the
story of how that all came to fruition.

His successes were inspiring because they
did not come from having a lot of money or resources, but rather, they came as
a result of his hard work, determination, gut feelings, support system, and
unwaveringly firm stance behind his mission and vision of “bringing vegan,
low-on-the-food-chain protein to the world.”

A sense of creativity and community and an
enjoyment for life were instilled in him from a young age by his parents. When
he went to college to become a teacher, he found the traditional classroom
setting to be too restricting and unimaginative, and he could not be true to
himself in this way. Although teaching elementary schools was ultimately not
his destiny, it was during this time in college where he stumbled on to
vegetarianism and the wonders it could do for human health and the planet, and
it became one stepping stone on his path to revolutionizing the vegan food
market with the Tofurky.

As his perspective changes, he goes on to
become a wandering naturalist, spending a lot of time in the great outdoors
with very little income. His modest lifestyle allowed him to have freedom and
create memorable experiences, one of which being his discovery of tempeh. Upon
visiting a commune known as The Farm, he learned about the miraculous mold and
soybean combination that made tempeh. Immediately becoming fascinated with
tempeh, Tibbott purchased a starter culture and produced his first batch. The
rest, as they say, is history.

Tibbott’s passion for this process leads
him to create his company, Turtle Island Soy Dairy, where he devotes his time
to producing tempeh. He faces many trials and tribulations along the way. With
a lack of fundamental business knowledge, a meager annual budget of $2,500, and
a slew of individuals insisting that meat consumption would never change in
America, what could possibly go wrong? He shares with his readers his many
transitions, mistakes, insights, signs, and moments of growth, all of which
eventually lead him to pivotal decisions and his aha moment of creating the
Tofurky.

He never gives in. He never gives up. He
uses the resources he has to constantly grow, learn, and improve, while keeping
Turtle Island Foods and Tofurky brands under family ownership for the past
forty years. A lot can be learned from this humbling, often humorous, and
engaging story of someone who wants to change the world for the better, one
Tofurky at a time.

I definitely recommend looking for the
Tofurky brand on your next trip to the grocery store, and I absolutely
recommend reading this book!

You can order the book on
Amazon here: https://www.amazon.com/Tofurky-Story-Pioneered-Plant-Based-Dinner/dp/1635766532/ref=tmm_hrd_swatch_0?_encoding=UTF8&qid=&sr=